You can see from my blog that I take our children pretty much everywhere with me on the farm. The thing is, there are places I no longer go, so they can stay safe. I don’t milk, I don’t get into the yard when it’s full of cows and I avoid situations where cattle of any age are moving quickly in confined spaces.

I can make these choices because we can afford to pay other people to help but not every farmer can. And out here, the town’s youngest children have access to just two hours’ formal care per week.

If you don’t have an extended family willing and able to help, you might feel there’s little choice but to leave the kids playing by the gate or sitting in the ute while you do a risky job. This is how farm safety and childcare are so tightly connected. There’s nothing bourgeoise about needing childcare to drench the heifers or build a fence.

The impact of a lack of childcare on a farming community is tricky to gauge but the unfathomable grief that seeps through a community after the death of a child is something that resonates in your bones for many years. According to the stats, one child is killed on an Australian farm every fortnight.

I wouldn’t normally include a whole slab of stats but these, from the Aghealth Australia site, are so telling:

A recent study by the National Farm Injury Data Centre (NFIDC) based at AgHealth of on-farm fatalities for the 2001-2004 period found that:

There has been an improvement in the reduction of toddler drowning on farms in recent years – particularly a reduction of dam drownings, which have halved since the early nineties. However, drowning is still the number one cause of child farm fatality in Australia. A common scenario is that a toddler wanders away from the home un-noticed into farm water bodies or toward other farm hazards (vehicles, mobile machinery). Apart from dams, children can find their way into creeks, troughs, dips and channels. Children under five years are at greatest risk.

For non-fatal injury of children on farms, older children (5 -15 yrs) figure more prominently – particularly in relation to injury from 2 and 4 wheeled motorbikes (and horses). Whilst there tend to be more hospital ED presentations for 2 wheeled motorbikes, injuries from quad bikes are likely to be more severe or fatal, with 4 times as many children being killed off ATV’s than 2 wheel motorbikes on farms (NFIDC 2007). 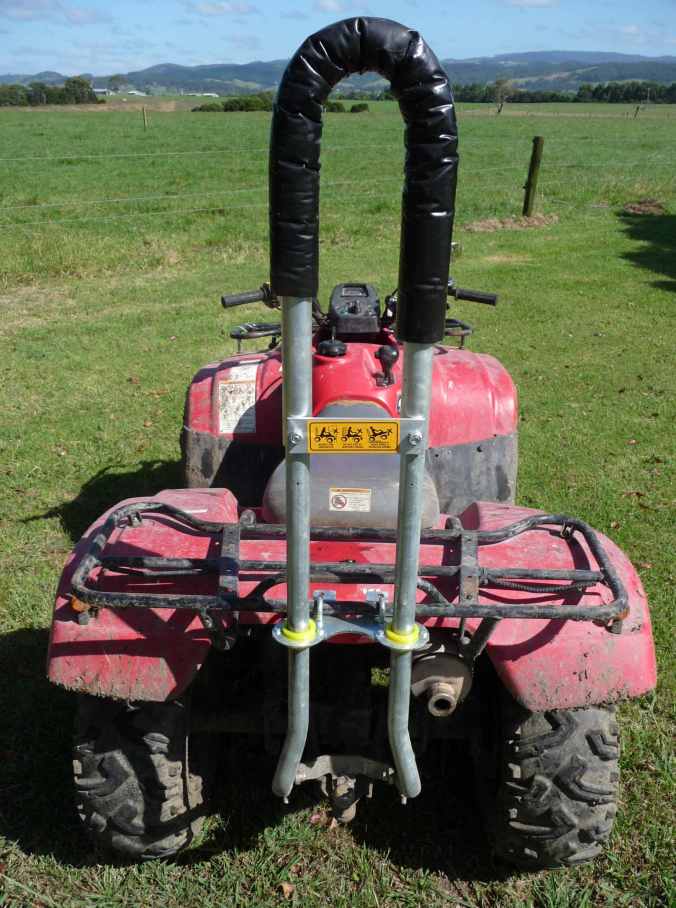 Just like Big Tobacco before it, the quad bike industry has been adamant its machinery is not responsible for the deaths of Australian farmers – rather that they got themselves killed.

The Weekly Times and SafetyOzBlog have reported the gyrations of the manufacturers and their representatives, the FCAI, which even included forcing some sponsored riders to remove crush protection devices. They claimed that the only answer was more rider education and that rider error was almost invariably the cause of the 23 deaths on farm ATVs in 2011 so far.

I thought it was all over bar the shouting match when The Weekly Times reported that the FCAI had dropped its opposition to Australia’s crush protection device, the Quadbar. Then I heard that at least one manufacturer has advised its dealers that its position is unchanged.

Now, the SafetyOzBlog carries this media release from the respected and independent Australian Centre for Agricultural Health and Safety tearing strips off the FCAI for failing to correct what the ACCC described as misleading and deceptive conduct.

“Embarrassing or not, the families of those people killed and permanently injured in such rollover events have a right to know why the FCAI, as suggested by the ACCC, has not only misrepresented the evidence but why they have not addressed this issue in a timely manner. The inaction and questionable approach of both the FCAI and manufacturers is showing complete disregard for the safety of their customers.”

People on our farms are dying. No matter who is responsible for the rollovers, the Quadbar is estimated to protect between one in four and one in three people. It’s worth it.

For more information on quad bike safety, call the Australian Centre for Agricultural Health and Safety (02 6752 8210) or visiting the website at www.aghealth.org.au 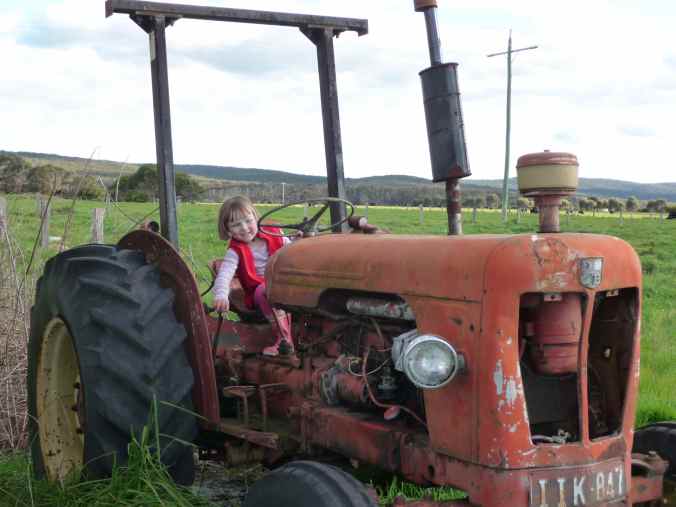 I used to mow and rake the hay with this tractor and the brakes were so hard to operate, I had to stand up to put all my teenage weight on them to get the David Brown to stop. Those were the days before Roll Over Protection Systems (ROPS), let alone cabins, on tractors.

Today’s tractors must have ROPS by law and most have cabs as standard. Thank God. My husband, Wayne, was unloading a B-Double truck of hay recently, when one of the huge rectangles (8x4x3) weighing just over 500kg fell off the front end loader tynes, bounced off the tractor where the windscreen meets the roof and came to rest perfectly balanced on the bonnet. Without the ROPS built into the cabin, he would almost certainly have been killed.

Even though we are much better protected these days, tractors and quad bikes cause almost all the deaths on Australian farms. The introduction of ROPS on tractors was really contentious back in the 1990s (was it that long ago?) and now, the introduction of Crush Protection Devices on quads is causing the same controversy today. The sooner we just put them on and get on with it, the more lives we’ll save.

Motorbike leathers are worn like a badge of honour by some of the toughest (and scariest) blokes in the country. They reek of the danger inherent in their metal steeds.

Farmers don’t share this aura yet spend hours every day on bikes and working inches from hundreds of half-tonne animals. The risks are real and the consequences can be heartbreaking.

Following yesterday’s tragic death of an 11-year-old boy, WorkSafe spokesperson Michael Birt told The Weekly Times there had been 14 workplace deaths in Victoria and five of those were on farms.

“A third of the deaths have happened on farms and it’s people doing routine tasks. You don’t get much more routine than moving cattle on a dairy farm,” Mr Birt said.

Despite all of this, some of us hesitate to protect ourselves. I don’t know why. The other day, someone suggested there’s a fear we might “look like sissies”. By all means call me a sissy for looking after myself but I wouldn’t try running that line by a Hell’s Angel.