While so many of us are aching for some stability, for things to just settle down a bit, the report crystallizes fears that change has only just begun.

The scale of the shake up is huge

While Rabobank’s chart illustrates just how much milk MG has hemorrhaged, it also shows that MG continues to be a critical player in the whole industry’s fortunes. As does Fonterra, now more than ever.

Fonterra is abandoning the Bonlac Supply Agreement, which used the MG price as a guaranteed baseline, for something yet to be announced.

MG, the Rabobank report concludes, has suffered “structural damage” that will, if it can recover, take years to repair before the co-op can resume the role of price setter.

So, here is the kicker in Michael Harvey’s own words:

“The reality is that the old system of price discovery for raw milk has broken down and a new method of price discovery will need to emerge, meaning that, in the future, dairy farm operators will be operating in a more commercially oriented and flexible market for their milk.”
– p. 4, Harvey M., (2017), The Australian Dairy Supply Chain

Is it a warning? Perhaps. Change is often difficult but it brings fresh opportunities, too.

Milk flowing beyond borders
According to the report, there is an increasing appetite for milk processors to spread supply risk beyond their traditional collection areas.

A rethink of the current price system
Michael Harvey devotes a significant portion of the report considering the impact of the production decline on Australia’s status as a preferred supplier. “Alarm bells are ringing for international customers,” he writes.

In this context, Mr Harvey also discusses the tension between the need for flat milk supply versus the lowest cost of milk production – on one hand processors can’t manage a very “peaky” supply and, on the other, the discounting of Spring milk has forced up the cost of production for farmers, stifling growth.

Let’s just hope that out of this crisis comes a fresh start.

Could Australia be running out of milk? Dairy identity Darryl Cardona told the senate inquiry that we could be importing milk in two years. according to media reports. Wondering if this really could be possible and what difference it would make, I turned to Rabobank senior dairy analyst, Michael Harvey, for insight and am really grateful for his guest post below. Thanks Michael!

The Australian dairy industry is staring down the barrel of one of its largest annual falls in milk production and would follow a 2% decline last season. This season has begun with three consecutive months of double-digit falls and is forecast by commentators (including Rabobank) to finish the season down between 7-10%. One of the country’s worst droughts in history was the catalyst for a contraction in supply of 8% back in 2002/03 – a clear indication of how difficult it is right now.

The collapse in milk production is not surprising given the challenges being endured on-farm. Some producers are exiting the industry and the producers who remain are making strategic decision to quickly bring down their breakeven levels through reducing herds and cutting costs. Just to make matters worse, seasonal conditions present challenges for the second consecutive season (but for complete opposite reasons). Some dairying regions are faring better with seasonal conditions and less global market impact on milk prices – the steepest declines in production are from across the southern export regions.

A loss of milk can have a material impact on profitability. This is through reduced efficiencies and higher overhead costs associated with running processing plants at less-than-optimal rates. The financial impact will depending on how much milk is lost, where from, and what the manufacturing footprint is to be able to spread the impact.

As has been well publicised, there is active recruiting of milk supply across southern Australia leaving Murray Goulburn the most exposed processor. For a processor the size of Murray Goulburn, a short-term loss of milk supply can be managed. However, losing a large quantity of milk in a rising price environment is not ideal. Furthermore, a more permanent loss of milk supply may require a review and resize of its manufacturing footprint (existing and planned) to meet the new supply realities.

But Australia is actively engaged in global trade and is an open economy. In the same year, Australia imported over 1 billion litres (in liquid milk equivalent) of dairy products and ingredients. A large portion of this was either cheese or butter for a use across retail, industrial and foodservice. Australia also imports ingredients that are in short supply locally. Examples include whey, casein and lactose for production of nutritional powders.

For most dairy processors, a drop in supply will mean an immediate reduction in exports because the domestic market delivers higher and more stable returns and supply is tied to contracts.  If Australia’s milk supply falls 10% this season that would equate to a loss of over 1 billion litres in just two seasons – a worrying trend for the entire industry.

Long-term a continued fall would trigger a spike in imports of more cheese, butter and ingredients to meet shortfalls and cover the loss of milk as processors focus on utilising local milk in the most profitable streams. But Australia would need to lose a lot more milk before needing to import liquid milk from New Zealand to meet the local consumer market for fresh dairy products.

What the future holds
So what can we expect moving forward? Firstly, better seasonal conditions over the remainder of the season would help to stem the loss of milk. Secondly, there are positive signs in global markets which have seen some improvement in farm-gate returns. Rabobank is confident of a sustained price recovery which will flow back to the farm gate. While it might be too late to have a more material impact of farmer margins this season, 2017/18 is shaping up well and should see a return to profitability on-farm. This would go a long way in stopping further bleeding of milk supply.

There is a risk for the whole of industry that Australia’s milk pool will remain stagnant or shrink further. Collectively the industry needs to re-ignite profitable milk supply growth. Australia needs at least 1% growth in milk production each year just to meet growing, albeit modestly, domestic market requirements.

Incentivising milk supply long-term to maximise help existing and planned processing capacity is more demanding. Restoring confidence and appetite for investment at the farm gate, which history shows for Australia, is an element difficult to attain and will require a sustained period of farmer profitability. 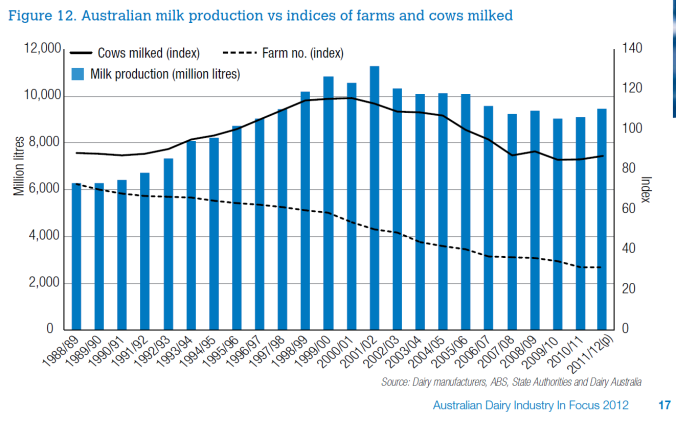 Consider this entreaty from the charming Lino Saputo Jr, who is the newish owner of Warrnambool Cheese & Butter:

“…what will it take for the dairy farmers to be optimistic about the dairy industry and investing in their farms and what kinds of programs can we put in place that will assist them.”

“What we are trying to do in Australia is appeal to the dairy farmers and say, ‘Look, we can be a good home for your milk. If you choose to increase your herd size and you’re producing more milk, we will put on the infrastructure to process that milk’.”

Lino’s not alone. Many of the processors including our own co-op, MG, would like to see Australian dairy farmers arise from our slumber and produce more, more, more. Why, the industry even commissioned the Horizon 2020 Report last year to work out why we are so sluggish.

But even a simple dairy farmer can sum it up in two words: END_OF_DOCUMENT_TOKEN_TO_BE_REPLACED

Just like the mother of a newborn babe, dairy farmers spend a lot of time examining the poo of their charges.

Perfection in poo is a noble quest

It’s not easy to live on grass. The stuff is very hard to digest and that’s why cows have developed an amazing digestive system that this really nice little video explains beautifully in a little over a minute. As you’ll see, the rumen and its helpful bugs play a vital role.

Manure is the dairy farmer’s window into the rumens of the cows. If their diet gets out of balance, they can get “acidosis”, which means the bugs die off and the cows find it very hard to digest their food. Not surprisingly, this is bad news! If it gets bad enough, the cows get extremely sick but it can also be subclinical, only affecting milk production. One of the first signs is the wrong type of poo.

“Manure has a porridge-like consistency. Forms a soft pile 40–50 mm high, which may have several concentric rings and a small depression in the middle. Makes a plopping sound when it hits concrete floors and will stick to the toe of your shoe. This is what you are aiming for.”

Because we’ve increased the cows’ grain ration with the onset of spring, we’ve matched that with extra fibre in the form of silage to prevent acidosis and I’ve been Chief Manure Monitor to check we’ve got it right.

I thought that when our farm consultant, Matt, arrived earlier this week he’d be proud of me. Well, he was but said that, if he was to be really picky, perhaps the poo was slightly too firm. As a consequence, we’ve upped the grain a little and backed off the silage by one roll.

Oh, the road to perfection has no end!