“How much did you get?” will be the standard greeting in town for the next week or so.

If not for Alex, I would have stripped off and run outside when the thunderstorm hit this afternoon. Until today, we’d been well settled into a very dry weather pattern typical of a traditional scorching summer. The grass was going backwards fast and the amount of milk we’ve been sending has been shrinking every week. My trusty forecasting website, Oz Forecast, had seen it coming for almost a week though and I was ready.

Feeling bold but a little nervous, I’d laid thousands of dollars on the line by having urea (a fertiliser that is 46% nitrogen) spread across a swathe of paddocks last Friday. Nitrogen is amazing stuff, more like water than fertiliser really: its effect lasts only a few weeks so you need continual top-ups but under the right conditions, it makes grass grow like nothing else.

It’s not cheap though and the wrong conditions can see it quite literally evaporate, or “volatilise”. A fact sheet by esteemed University of Melbourne scientist, Richard Eckard sums it up this way:

What is Volatilisation?
This occurs when urea fertiliser is converted to ammonia gas, a process which takes place in the first 48 hours after application. Conditions during that first 48 hours are critical to the amount of nitrogen lost.
How much is lost?
Trials conducted recently at Ellinbank showed losses to volatilisation are highest in February and are commonly around 14% on the nitrogen applied as urea. However, loss between May and November are substantially less, being between 3 and 6% of the nitrogen applied as urea. Other sources of nitrogen do not volatilise under our conditions, although on DAP would justify the price difference if only 14% is lost from urea.
How to minimise volatilisation losses?
1) Low wind speed: In one experiment a 14% loss was reduced to around 4% the next week where there was almost no wind. One strategy, adopted by some farmers, is to apply nitrogen a few days before grazing. This reduces wind speed at ground level almost zero due to the longer grass and any surplus ammonia gas produced is absorbed direct into the leaves of the pasture.
2) Lime application: In a similar experiment a loss of 12.5 % of nitrogen from urea was increased to 22.5 % by applying urea where 2.5 t/ha of lime had recently been applied. A simple solution where both urea and lime are required would be to apply the urea first, then apply the lime a week later.
3) Rainfall: In another experiment at Ellinbank rainfall was simulated in February by irrigating after applying urea. Urea volatilisation losses were only 4 % where 23 mm ‘rain’ was applied within 24 hours of the application of urea. Likewise with 9mm ‘rain’ losses were 7 % and with 3mm ‘rain’ losses were 14 %. However, applying urea the day after 23mm ‘rain’ resulted in a 21% loss!

Those nerves when I ordered the urea were justified. I would have lost a lot of nitrogen in those first 48 hours but I’d paid an extra $15 per tonne of “insurance” in the form of Green Urea. According to its manufacturer, Green Urea is “treated with the urease inhibitor, N-(n-butyl) thiophosphoric triamide (NBPT), to delay hydrolysis of urea into nitrogen forms that may be lost to the atmosphere”. In other words, we had seven days to get the weather right rather than 48 hours.

If the forecasters continue to excel and deliver the promised mild conditions over the next week, the grass will rocket away, pleasing the cows, the farmer and her banker no end!

I will never look at cow poo the same way again. A revolutionary technology arrived at the farm this week that is a huge win for the environment and for the farm. 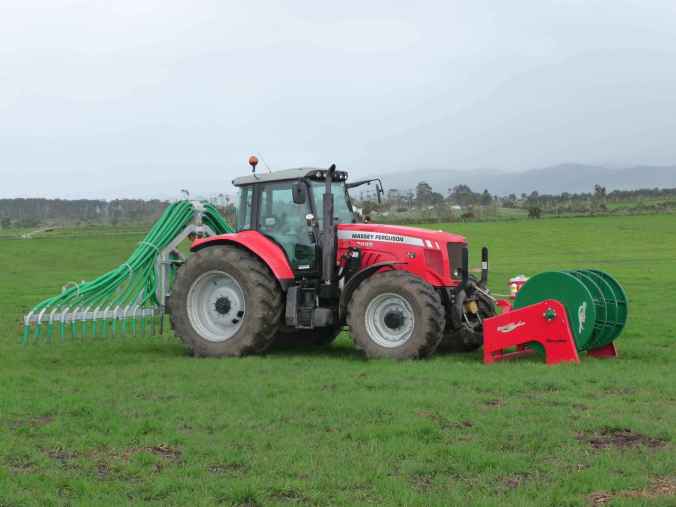 While most of the manure produced by our cows (and they dump a massive 40 litres each every day!) goes straight back onto the paddock, we do have to wash away the stuff that drops on the dairy yard while they’re waiting to be milked.

Rather than allow it to pollute our waterways, we collect it in an effluent pond to be applied on the paddocks as fertiliser. Sounds ideal but, unfortunately, there’s been a deal of guesswork in knowing exactly what’s in it and what rate to spread.

The only way until now was to agitate the pond (at significant expense) and send a sample off to a lab before agitating it all over again and getting it out with a slurry tanker that literally splashes it all over the pasture like Vegemite on toast.

The local and forward-thinking Bowden’s Agricultural Contracting owner, Wayne Bowden, has just bought a Slurry Kat that monitors the nitrogen content of the effluent as it’s pumped out and lets me choose just how much is applied per hectare.

In practice, that means instead of saying: “Aaah, about a quarter inch thick, please”, I can say “60 units of N per hectare, please”. Wayne can even tell me how much phosphorous is going on.

Why do I care? It means less likelihood of leaching excessive nutrients and we don’t use too much or too little bought-in fertiliser. 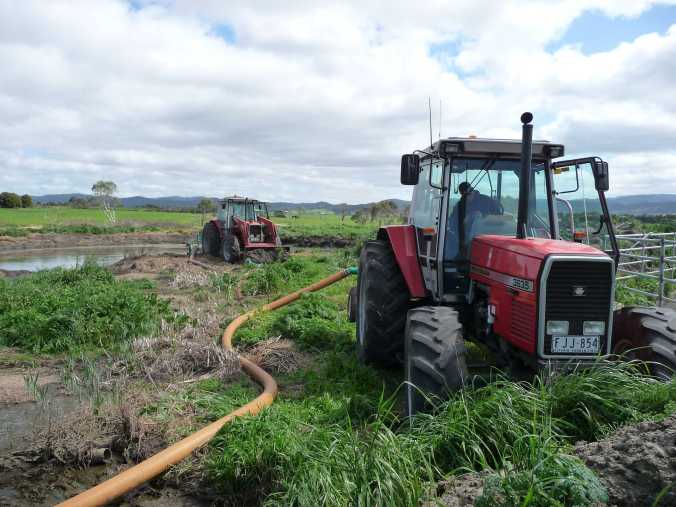 The front tractor pumps the effluent up the umbilical hose

How it helps us manage our effluent for a better environment and greater productivity
Aside from the extra information and control the system brings us, the benefits are:

Slurry Kat lines of effluent after 24 hours on the paddock