My recent brush with 650kg of angry cow triggered a discussion on social media about the best way to protect yourself from an attack. Veterinarian Dr Zoe Vogels offered some interesting insights about the ways cows perceive the world and kindly agreed to explain more here on Milk Maid Marian. Thank you, Zoe, for this fascinating guest post!

One thing I don’t remember being taught at university was cow biology and behaviour – a must, one would think, for a new grad dairy vet! While preparing for a farmer talk earlier this year, it was good to finally read up on such an interesting topic.

Domestication of wild cattle began in the middle east more than 10,000 years ago – as an exchange. Cattle give us milk and meat and labour and in return we provide them with food, water, shelter from the environment and safety from predators.

Despite cattle being domesticated for such a long time, some of these wild behaviours have never left. As prey animals, cows are constantly vigilant to detect and escape from potential predators.

Cows have binocular vision for only the 25–30° straight in front of them. Binocular vision is like ours: the eyes can focus to perceive depth, distance and speed.

To get the best possible vision of something of interest, cows will lower their head and face the object straight on.

The rest of a cow’s field of vision is monocular: they can detect movement very well (i.e. potential predators) but cannot judge depth or distance well.

When a cow is grazing with their head down, they can see almost 360° (which helps to monitor for those nasty predators!) but when their head is raised, there is a blind spot behind them. Approaching cows from the front, approaching them quickly and moving in or out of the rear blind spot can spook a cow.

I’d love to be able to put on some “cow-coloured” glasses to see the world through their eyes. One thing I discovered is that cows can see colour, though perhaps not with the intensity that we can. They can distinguish red from green or blue but have difficulty distinguishing between green and blue (Phillips and Lomas, 2001, JDS 84:807-813)

Cows have horizontal pupils and weak eye muscles, which means they cannot focus quickly. Shadows and bright light will make them baulk. For example, a shadow across the dairy yard – is it a shadow, or a deep, dark snake-filled pit that they will fall into?!

A few safety tid-bits
Despite thousands of years of domestication, the behaviour of cows still closely resembles that of their wild ancestors. These ancient bovines used to react to wolves by running away – kicking as they ran – or by turning and fighting back by butting and goring. 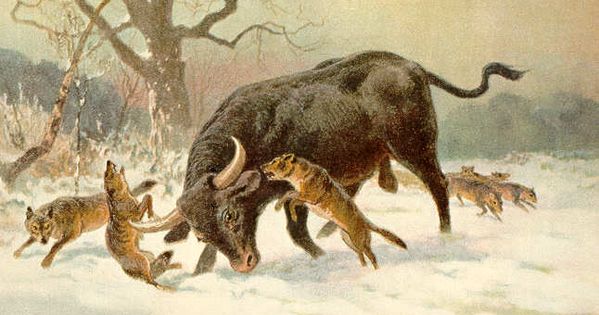 A wild Auroch fighting back!

Remember that if frightened or angry, cows can defend themselves by using their head to bunt, horns (if they have them) to gore, and legs to kick. Stationary cows can kick forward to their shoulder and out to the side with their hind legs, while moving cattle kick directly backwards

Bulls and cows with calves can be especially dangerous: the following link shows a cow trampling a bear that got too close to her babe. Animals can turn on you in the blink of an eye and it’s important for everyone working with cattle remembers this doesn’t get complacent: on a recent veterinary discussion list, the following wise words were uttered: “treat ‘em all like they’re killers”.

Even down cows can be dangerous with their back legs – I’m sure many of you have seen this awful footage.

As herd animals, cows all want to do the same thing at the same time, as it reduces the risk of predation (they confuse those wild lions by the large number of animals running in random directions). This means cows are fearful of situations where they are solitary isolation.

As a vet, I have encountered this many times: an animal that’s quiet and blends in while with the herd, but wants to kill you when you’re called on farm to examine it. Keep several animals together and ensure everyone (including the vet!) knows which animal is to be seen/treated.

There are lots of other OH&S issues when working with cattle (I could write another page on crushes for example), but three important ones: