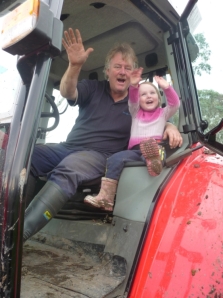 Farm kids get to spend lots of time with their Dads

When I was a little girl, my brother and I had to feed the calves before we went to school and had plenty of jobs on the farm waiting for us once we got home. Naturally! It was the same for everyone else at our primary school.

It was an entirely different picture at our private secondary school in Sale, the home base for the oil and gas industry. Most of my classmates only had to take the bin out or do the dishes and some of them had never even been to their parents’ workplaces. To a teen who had to spend a couple of hours a day on the bus, it didn’t seem fair.

After a while and a few sleep-overs, though, I began to see some merit in living on a farm. We were certainly never bored and we did get to know Dad very well, even if it was while we worked.

It was all brought home to me the other day when Zoe’s kindergarten class put on a little performance for us. One of the songs, “I’m a little teapot”, made tears well up. My Dad had taught me the same song 35 years earlier as I skipped alongside him to round up the cows. Dad would have been so proud of my little girl and even though we round up with the Bobcat these days, Zoe prefers to walk along behind the cows while we sing silly songs together.

2 thoughts on “Meshing farm and family”