I’ve been mightily impressed by the incredibly entertaining dairy blog of one very clever South African teenager, Firn Hyde, and asked her to send in a guest post.

Hello everyone in Australia and beyond. First of all I’d like to thank Marian for the very kind invitation to contribute to her fabulous blog. It’s much appreciated!

I’m Firn Hyde, the teenager of Hyde Family. We live in the Highveld of South Africa and run a small dairy called Hydeaway Farm, where we embrace our slogan – “Names Not Numbers”. My mom, Dinki, and dad, Jon, run it together; Dad is also a computer programmer and works in Johannesburg, so Mom does a lot of the daily management while Dad works on maintaining machinery and fences. Their two daughters, myself (fourteen years old) and Rain (twelve) complete the Hyde Family.

Dinki, Firn and Rain Hyde with Holstein heifers, Hermoine and Kaleidoscope, bred by Brett Gordon at the Standerton show

Mom and Dad chose to homeschool the two of us and in doing so gained two valuable farm labourers. Whilst Rain is a ballet dancer and does the more domestic jobs, I like to get dirty and work with the animals. This is definitely a family business. It’s a dream we all chase together.

We milk 90 registered cows and own Hydeaway Jersey Stud. We love Jerseys for several reasons, among them size, calving ease, temperament and their golden, creamy milk. The cows and many of the Jersey heifers go out to graze during the day. We would love to have beautiful pastures like Marian’s, but at present the best word for our grazing is “veld”, which is something between “grassland” and “wilderness” in our native language, Afrikaans. Due to the poor quality grass we supplement them with good eragrostis hay. 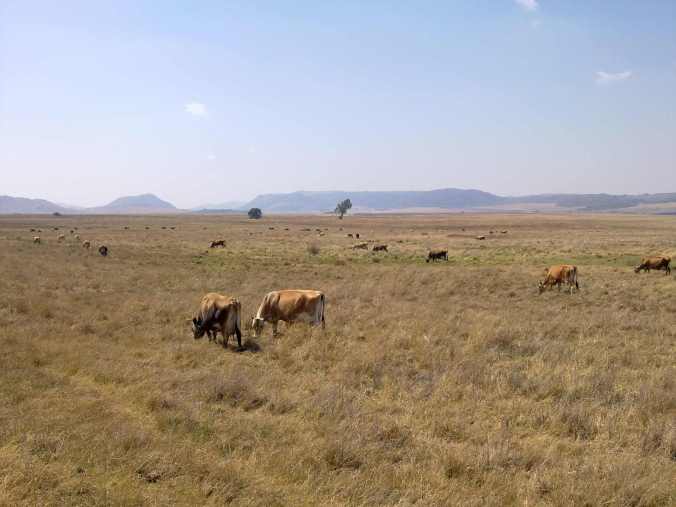 Hydeaway Jerseys grazing on the veld

By far the more successful part of our farming operation is the heifer raising. Holstein heifers arrive here at 3 months of age. They live in small but grassy paddocks and eat pellets and hay, growing to about 350kg at the age of 12 months, when they are artificially inseminated by yours truly. We keep them until they’re 7 months pregnant, then their owner takes them home to be milked.

In S. A., it’s generally the big farmers that do the best; they say you can only do it profitably if you milk upwards of 300 cows and grow your own feed. Total mixed ration is more popular than pastures, and cow housing is apparently the way to go but we find the idea of keeping cows inside 24/7 positively sickening. Yes, we are sentimental, but the cows are happy doing what cows are supposed to do; graze and interact in a herd.

Altogether, there are roughly 500 cattle living on our farm. Oh yes, and they all have names, every last one. Walking through the paddocks is asking to be thoroughly licked and slobbered on.

The single greatest difference between dairying in Australia and S. A. is probably the labour. Labour in our country is relatively cheap, but unskilled. We have 13 workers, with at least 11 on the farm at any one time, and in harvest season other farmers can have over 40.

I’ll wrap up by telling all the dairy farmers out there to hang on. With just 2600 dairy farmers left in South Africa, we’re a declining breed. Those that are left are, for the most part, pretty special.