The job had got to that point where you have to stop for a minute and stare at it, just to ‘process’ its sheer enormity. Before me was a truly terrifying tangle of high tensile wire that had pleased the contractor by wrapping itself around the ploughing discs.

With the dawning realisation of defeat came the sound of something equally beyond the realms of reality: a babbling waterfall coming from the gully billabong. A very nice and very timely distraction.

The fish had gaping golden lips and flashy golden bellies to match. Each seemed about 2-feet long and oh-so-muscular. I may be a piscean but I know nothing about fish. Perhaps this group of half a dozen or so monsters are the dreaded carp, washed into the gully during one of this year’s floods. And what are they doing? Breathing or breeding?

Carp are considered the lowest of all fish around here: categorised as “noxious fish” by the Department of Primary Industries for the environmental damage they cause while being pilloried by cooks and anglers for their muddy taste.

But perhaps Charlie Carp deserves better. The big fish make excellent organic fertiliser and, according to one account on ABC Radio, might be alright on the menu if we Aussies learned the secret to eating carp.

Anyhow, the whole fishy dancing performance went on for five minutes and would have lasted longer if not for Patch. Yes, our most accident prone pooch had to investigate and was so intrigued, he forgot he couldn’t walk on water. Turns out he’s not that good at swimming, either. Crazy dog! 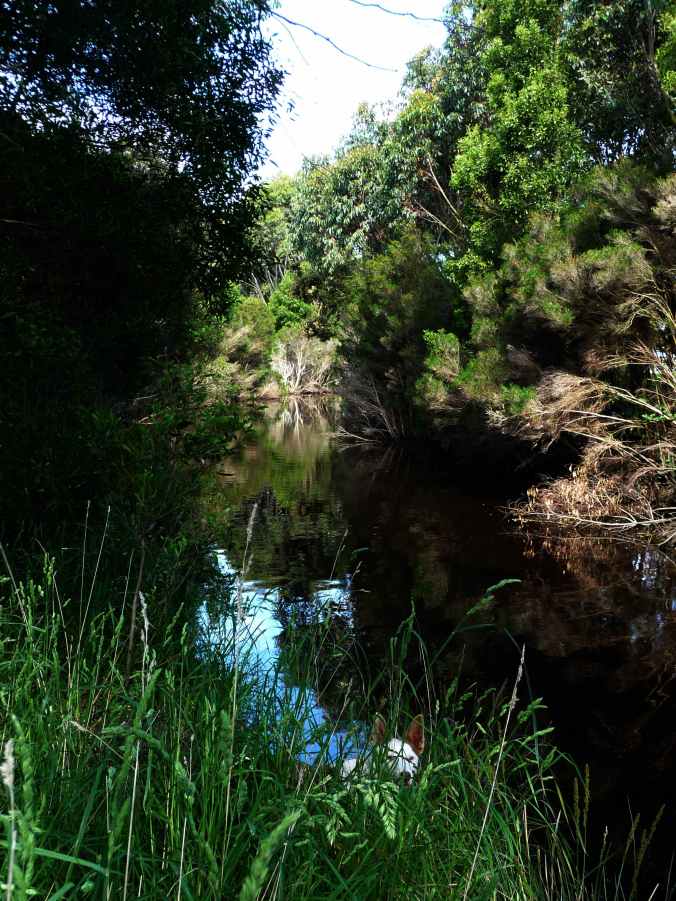 Patch had to come and take a look

Shame I missed the “after” pic. The memory card was full of fish video and photos. Patch isn’t the only silly one.

2 thoughts on “Who are these billabong refugees and what are they doing?”